We dropped off the cars in Chester just after 7.30am and then caught the train to Holyhead for our ferry connection to Dublin. The crossing was a bit rough and it was extremely windy out on deck. I tried to take some photos as we approached Dublin but they all turned out blurry because I couldn’t hold the camera still.

We caught a taxi to the Tourist office where we had arranged to leave 2 of our suitcases for the week in Ireland. The taxi driver was very accommodating and pointed out some of the major landmarks along the way. After dropping off the bags we caught the bus to the airport to pick up our hire car. It took about half an hour to go through the pickup process so by the time we left Dublin it was after 4.00pm. We planned to see the Ring of Kerry the following day so had a long drive ahead of us to Macroom. The traffic out of Dublin was very heavy out and it took quite a while before we could get a clear run on the motorway so we didn’t arrive at our destination until nearly 9.00pm. Macroom is a pretty ordinary town but Vicki & I had a nice view out of our window of the river and a field full of cows.

Our second day in Ireland was quite busy. We set off early and headed for the southeast corner of the Ring of Kerry. The sky was semi overcast with the sun breaking through from time to time. We drove down to a small bay which had lovely views across the water to the green hills beyond and stumbled across the oldest graveyard in Ireland. All day we were greeted with beautiful coastal views surrounded by green hills and valleys and several islands just off the coast. We stopped for lunch at the Scariffe Inn which boasts the best known view in Ireland. It is a very impressive but it was very overcast when we were there. During the time it took us to have lunch at least 5 coach tours pulled in and disgorged their passengers for lunch and the view. I imagine on most days during summer they serve well over 500 lunches but the service was very efficient and the food was good. I had the Irish Stew of course. 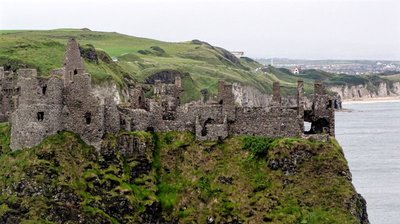 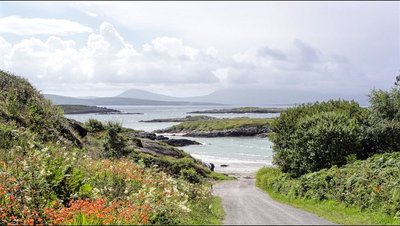 The road that follows around the coast is winding and narrow and we found out later that the tour coaches all have to travel around the Ring in the same direction so that they don’t have to pass each other on the narrow roads. We took a detour down a particularly narrow winding road towards Lamb’s Head. The drive was pretty nerve racking and we’d driven a long way with no indication as to how much further it was to the end of the road so we decided to cut our losses and turn back. We had to stop and pull over on numerous occasions to allow someone travelling in the opposite direction to pass. We all breathed a sigh of relief when we made it back to the main road particularly Lyn who was driving on this occasion. The views were lovely but hardly worth the scary drive.

After the Ring of Kerry we continued on to the Dingle Peninsula. Late in the day we stopped at Inch which has a large sandy beach and is the base for a surf school. It was freezing cold and the sky was filled with dark clouds but the beach was still quite crowded and there were actually some hardy souls in the water. Crazy Irish.

We had a brief stop in Dingle late in the day. It looked like a lovely town but it was full of cars and tourist coaches. The streets were jam packed with tourists and we decided not to hang around so headed north out of town towards Tralee. We stopped at the highest viewpoint in the area which had fantastic views in 2 directions. The weather by this time had turned quite nasty and it was freezing cold and raining. The views were great but visibility was limited. Apparently on a clear you can see all the way to Galway. We checked in at the B & B and then drove to the Rose Hotel for dinner. Very swanky hotel the restrooms were very luxurious and the food in the bar was good and a reasonable price.

Next day we drove around the coast again towards Galway. The landscape is much flatter than on the previous 2 days. We stopped off at a bay along the way where the rock formation and the sea were quite rugged. We arrived in Doolin around lunchtime and took a ferry trip past the Cliffs of Moher. The weather was quite bleak and the sea was really rolling. The cliffs are quite impressive but not particularly spectacular and if asked I wouldn’t recommend doing the ferry trip. Probably just as impressive from the road that follows along the cliffs. We didn’t do that drive as we wanted to reach Doolin in time for the ferry. We arrived in Galway around dinner time and asked the receptionist whether there was somewhere local we could walk to for dinner. She told us it was only a short walk so we headed off. We must have misunderstood her directions because we couldn’t find the hotel she told us about. We asked a couple of people on the street and each time we were told you just walk straight for a little while and then turn left at the roundabout and you’ll find plenty of restaurants. After walking for a while longer I checked out one of my map apps which showed the nearest roundabout was down near the water which looked a long way away. We walked back to the B & B and got the directions again and we had missed a turn. She told us it was about a 5 minute walk. We decided to get in the car anyway and just as well because it turned out to be more like a 15 minute walk. After dinner we drove down to the area near the roundabout that others had directed us to and it was 1 kilometre from where we asked to the roundabout and the restaurants were close to another kilometre to the left. We’ve learnt on this trip that people often say a short walk or a 10 minute walk just about every time you ask and it’s usually much further than that. Maybe we just walk very slowly

We headed off to Belfast for our last few days in the British Isles. We arrived in the early afternoon and spent the rest of the day grocery shopping and doing our laundry. The apartment has a combination washer/dryer and after our experience I definitely wouldn’t consider buying one. Both the washing and drying cycles take forever and you can’t wash a second load while the first load is drying.

On our second day in Northern Island we took a “Game of Thrones” coach tour which also visited the Giant’s Causeway and Carrick-A-Rede rope bridge. Our tour guide has worked as an extra on seasons 6 & 7 of Game of Thrones and is also the stand in for Liam Cunningham. We visited several sites used during the filming and he gave us quite a few insights into what it’s like to be an extra and also some information as to how long it took to film some scenes and what was involved in shooting them. He was a good storyteller and quite amusing. The scenery along the north coast was in my opinion even better than what we had seen in the Republic of Ireland. The weather was bleak, with light rain falling on occasions but the glens were lush and green and the villages we passed through were pretty with mainly white houses surrounding a natural harbour. 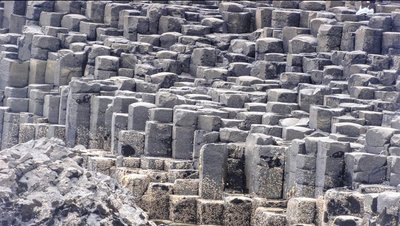 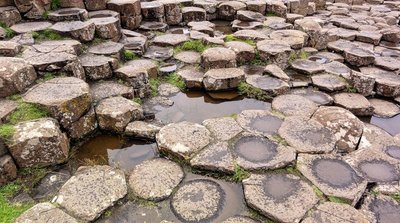 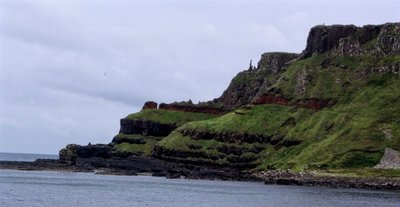 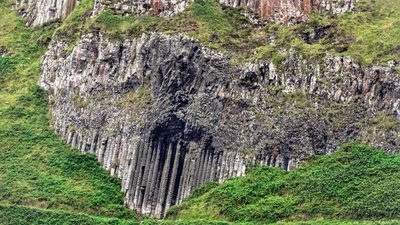 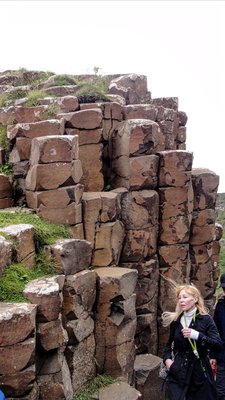 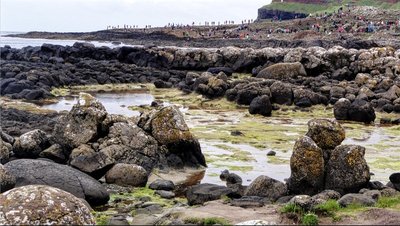 The Giant’s Causeway is truly incredible. Amazing rock formations along the shore that look like they have been carved out by humans but have actually been formed due to volcanic activity. There is a legend which tells the story of how it was built by the giant Finn Macool and that’s how it got it’s name. Some of the rocks look like columns of varying heights and others like pavers. The whole area was crawling with tourists. The columns form a natural stairway and people climb all over them to have their phot taken at the highest point – “I’m the King of the Castle”

Unfortunately we were unable to climb the rope bridge as it was closed during the day because of strong wind gusts. Because we couldn’t climb the bridge our tour bus asked if we would prefer to cut short our visit to that area and visit the Bushmill whiskey distillery instead. Unfortunately the majority chose that option so we didn’t have time to even get close to the bridge.

Our final stop for the day was "The Dark Hedges" which is actually a row of beech trees used in scenes from The Game of Thrones. They were planted by a landowner centuries ago because his house wan't as grand as some of his neighbours so he decided to plant the trees so that at least he had a grand entrance to his property. These days the road is full of Game of Thrones enthusiasts and apparently the locals aren't very happy about it. 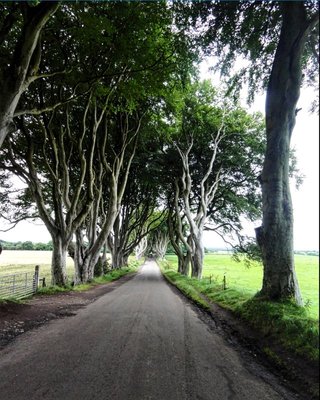 On our last day in Belfast we took the hop on hop off tour. In the morning we travelled around the main part of the city with a stop at the very impressive City Hall and later in the day we travelled through the western suburbs that were the centre of much of the conflict during "the troubles". The tour guides on both buses had grown up during that time and gave a really good insight into what it was like to live there during that period. There are still some peace walks around the town that were built to separate the warring factions. Even though it's been 19 years since the peace treaty the wounds are still very raw and locals have voted to keep the walls in place because they're concerned that if they come down trouble could start up again. Generally those who lived at the time want peace but there are still a few people around who want to stir up conflict. There are wall murals all over Belfast many of which depict messages about the troubles. 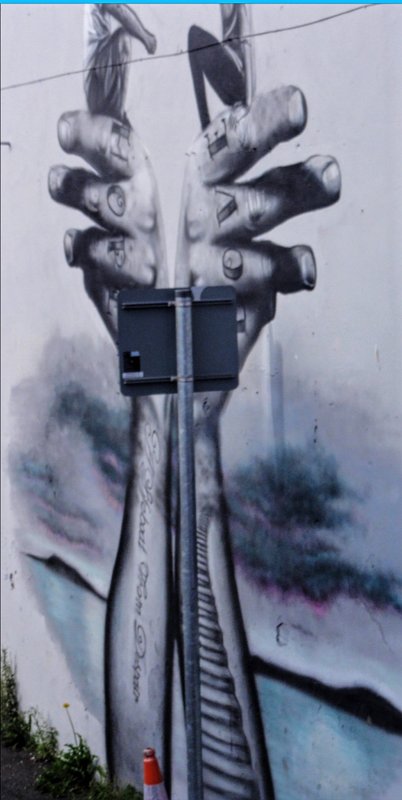 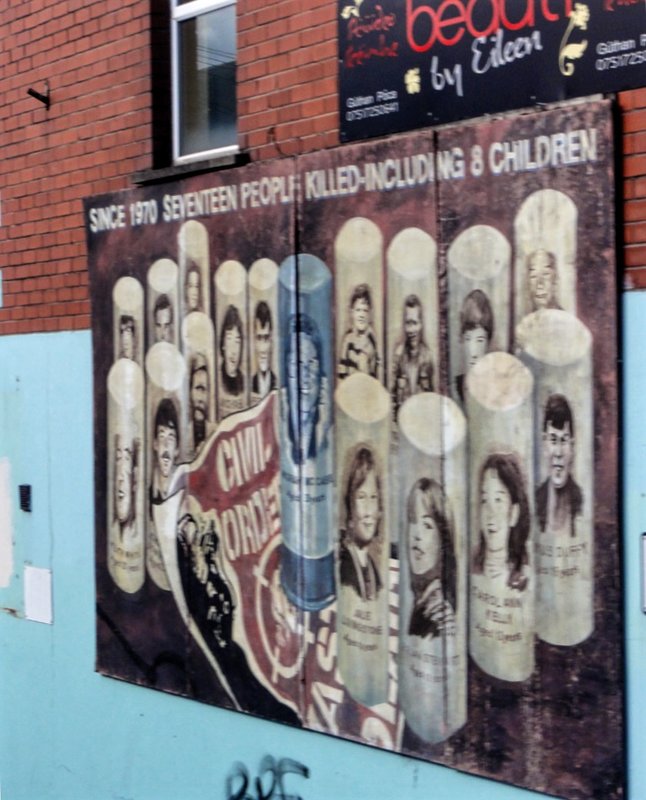 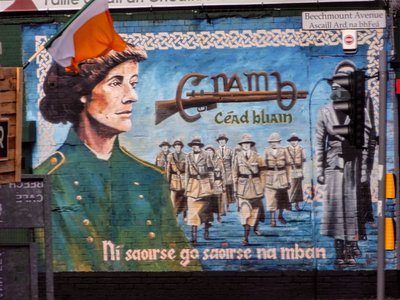 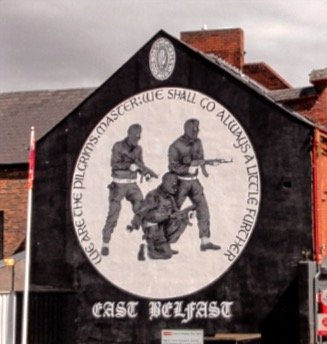 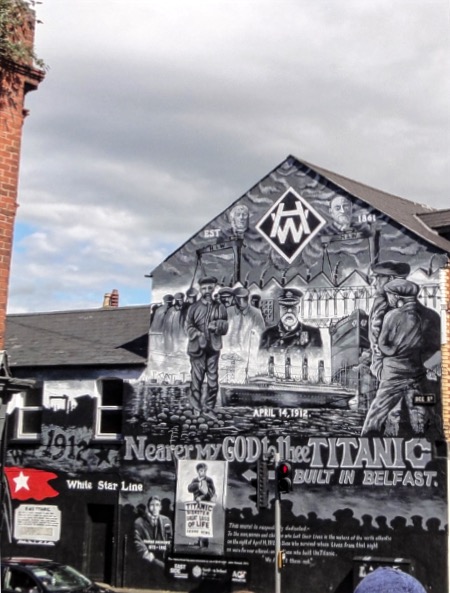 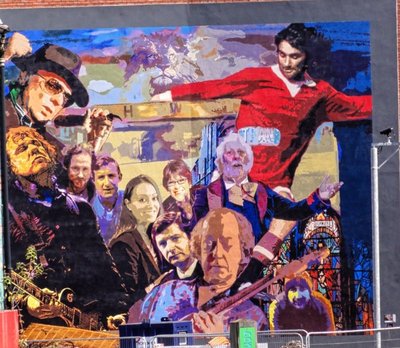 Next day we travelled to Dublin for the flight to Copenhagen to start our cruise.

This blog requires you to be a logged in member of Travellerspoint to place comments.

If you aren't a member of Travellerspoint yet, you can join for free.